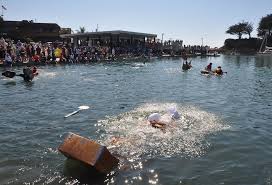 On September 14 in conjunction with the Santa Cruz Harbor’s 50th anniversary, we participated in the first Santa Cruz Harbor Cardboard Kayak Race. The team was KC guides Reilly and Sarah, Moss shop’s manager Chris, and owner Jess. We “competed” in the event where the boat had to be built on the spot under a time limit. It was hot. It was frantic. There was talk of cuts and folds and bends. And tape. Lots and lots of tape. We raced to complete our design (the only one that actually looked like a kayak, by the way!), and marveled in the creativity and hard work of those around us. Who knew there were so many ways to turn cardboard into a boat?? Ultimately we didn’t even know if the darn thing would even float, let alone paddle. And when our heat was up, there were nerves for sure. We had already seen some pretty astonishing successes as well as some spectacular sinking. The pressure to perform was enormous! The judge said “go,” and we threw our little bathtub into the water. Sarah jumped in and began paddling and…! She immediately capsized. She described it as “the least stable thing I’ve ever paddled.” So it didn’t work. Well, it didn’t function as a boat, but the event was a huge success. Lot’s of fun, and a great way to celebrate a major milestone for the Harbor. Even if you just come as a spectator, I would highly recommend check it out next year. Because I KNOW we will be there, too. -Chris Blair, Manager

Cleanup of the Elkhorn Slough with Save Our Shores

New one hour “Harbor Rental” at our Santa Cruz Location